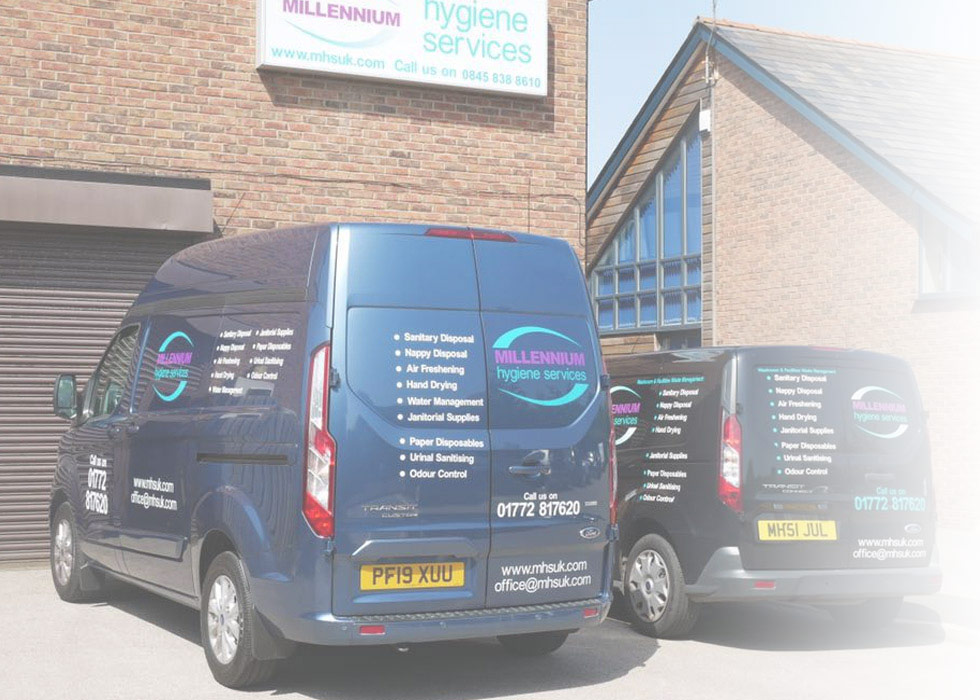 Millennium Hygiene Services are the leading provider of washroom and personal hygiene services in the North of England. Industries such as janitorial suppliers, workwear and laundry specialists, cleaning contractors and pest control rely on our outstanding 5 star service.

We have grown to service over 4000 sites becoming one of the largest, most respected independent Sanitary & Washroom Service companies in the North of England, with new contracts opening up every week.

We have a bespoke system for hygiene services which provides FREE Duty of Care and Waste Transfer Note documentation required by the Environment Agency. We use the latest technology to record all service visits on a bespoke Ipad.

Our contract retention rate is 95%

100+ companies rely on our excellent services

We Service over 4000 sites in the North of England

Protection of the environment in which we live and operate is part of our core values and principles.

www.animalsasia.org. We have sponsored a bear since 2008 at the Chengdu Sanctuary that was called Gypsy, unfortunately she passed away in 2019 but we continue to support the great work that this charity do.

Bear bile farming is a disgusting and horrible practice. There are about 7,000 bears on bear-bile farms in China. The captive animals are used to supply the voracious Traditional Chinese Medicine (TCM) market. Bear bile has been an ingredient in TCM for thousands of years, but intensive bear farming only came into existence in the 1980s when China’s supply of wild bears began running low. The farms, however, have created a new set of problems.

Usually bile is extracted from the bears’ gallbladders twice a day through a surgically implanted tube. The process, called “milking,” produces from .338 to .676 oz. (10–20 ml.) of bile each time. Milking is clearly painful for the bears, who are often seen moaning and chewing their paws during the process.

Bears are normally kept in coffin like crush cages for sometimes 15 years or more, unable to turn round stand up or even move.

Most bears cannot move and even stand because their muscles have deteriorated from lack of movement. The cages where the bears are held captive are so small, hardly even large enough to contain their occupants. And to prevent injuries to the farmers, the bear’s canine teeth and claws are often removed. They simply cannot defend themselves from this very painful process of bile extraction.

After almost eight months of recovery, the stoic survivors of the March 2008 rescue have ventured out of their cages and into their new dens! In what was an exciting and rewarding day for all of our staff in Chengdu, 19 November saw these brave bears take their first steps in years, on solid ground. Pictured below Gypsy our bear that we provided full sponsorship for discovers the joys of her new den.

But what really is the fuss over bear bile? Bile is a liquid that is produced by the liver and is stored in the gallbladder. It is an acidic mixture composed of acids, cholesterols, water and electrolytes that help in food digestion. Traditional Chinese medicine practitioners have been using bear bile for at least three thousand years already, and for a variety of reasons. The source of the bile is the gallbladder of a bear, and it can be collected by killing the bear. During the year 1980s, a method originally developed in Korea was adapted by the Chinese government when they encouraged commercialization of bear farming. Now, bear farmers can repeatedly remove bile from the bears while they are alive.

The process of bile extraction is highly inhumane. To harvest the bile, a connection has to be established from the gallbladder to the surface. This is done using any of the three ways: an insertion of a metal tube, insertion of a plastic tube, or a tissue bridge (in essence, a leak) created between the gallbladder and the skin.

Most of the time, these are performed by unskilled and untrained individuals who are not up to modern veterinary standards. And since the body of the bear will try to exclude a metal or plastic tube, it can cause scarring and damage to both the outside and inside of the bear. There are some cases where hot pieces of metal are inserted to prevent the hole from healing and closing – without any form of sedation or anesthesia.

Farmed bears are in pain, agony and suffering. Many die during or soon after the process. Several of them are malnourished and small. Most of them are missing a limb. There are many that are hairless. They do not have permanent access to water. Bear bile farming causes tremendous suffering, all to harvest a substance that is obsolete and now completely unnecessary.

Animals Asia Foundation have built a China Bear Rescue Sanctuary, first of its kind in the world. An adventurous creation which combines a safe, but natural, home-from-home for the bears in Rehab Centres and bamboo forest, – but which also allows inspirational “up-close” visitor access in specially created “zones”, where the general public can see – and experience – life as a bear!

Catering to their special needs are our professional team of on-site managers and workers, plus experts (including volunteers) who are experienced and qualified in working with bears, and who ensure that each day is filled with interesting enrichment activities to keep them stimulated throughout the day.

Always approachable, flexible and willing to help. Efficient and friendly. Extremely reliable. Excellent customer service and back office support. Would have no hesitation at all in recommended their services

Excellent prompt service from all the team. Easy to deal with and go the extra mile to help me out. Highly recommend!